GAME INTRODUCTION
The game is pretty easy to learn with just three things to think about:
Either SHOOTING LASER VOMIT at your opponent OR Holding up your CRABSHIELD.
Crabs cannot do both at once! If they could they would be the rulers of the universe.
And last but not least: MOVING AROUND!
Crabs move right or left by rotating their crusted bodies, this allows them to take aim at their opponents.
Strangely they dont rotate when moving up or down. I guess there is no strategic advantage in this.

You can be up to 4 Players fighting or you can train by yourself against the Training Crab. You might beat him
once in a while but no one has ever beaten him for an entire match. If you want to become the best
you have to be trained by the best!
Easy to learn, hard to master!

Release Date: 3 February 2015
Price: Pay what you want!
Where: ITCH.IO (yes, this is where the url will be in the future) 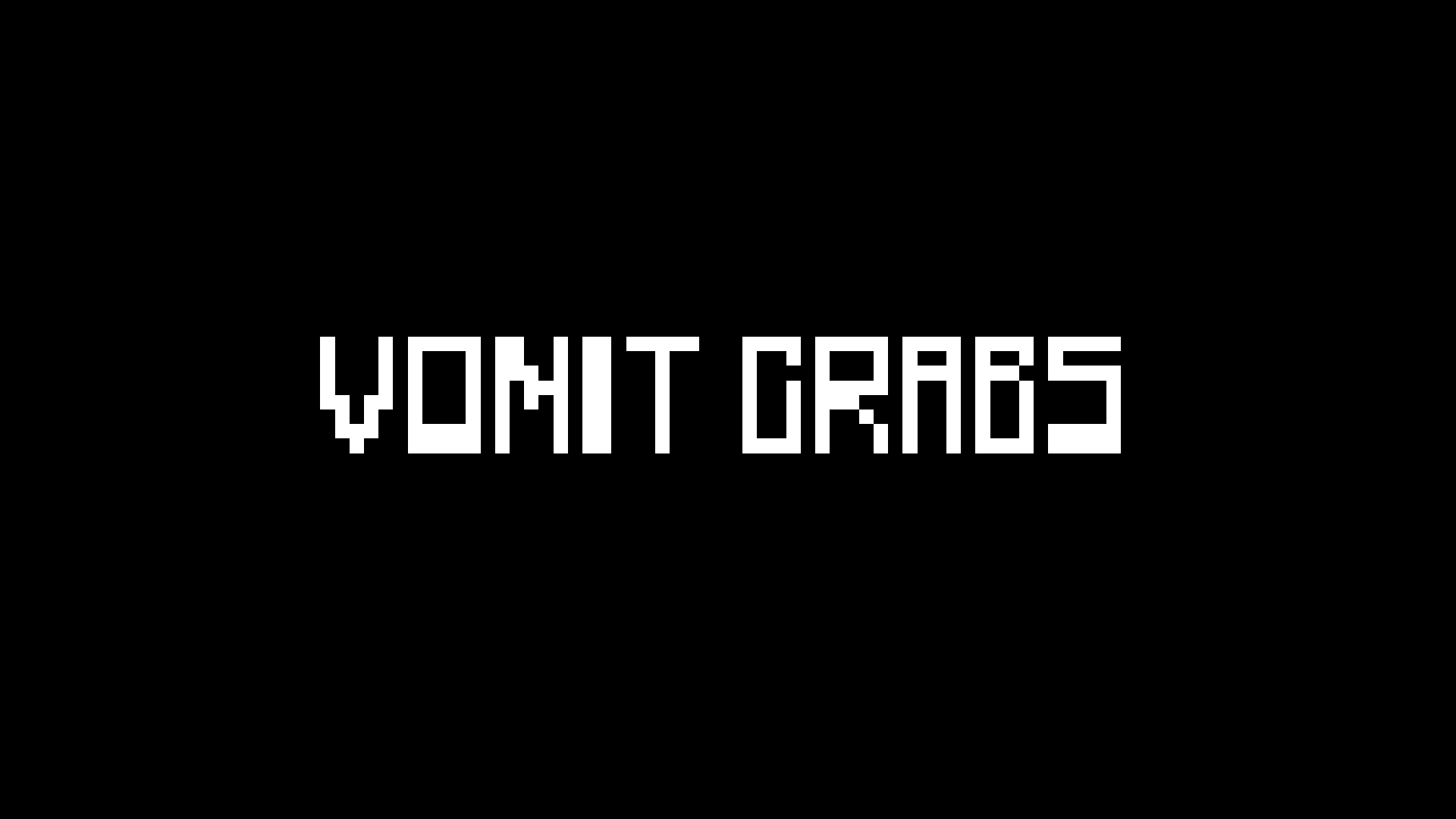 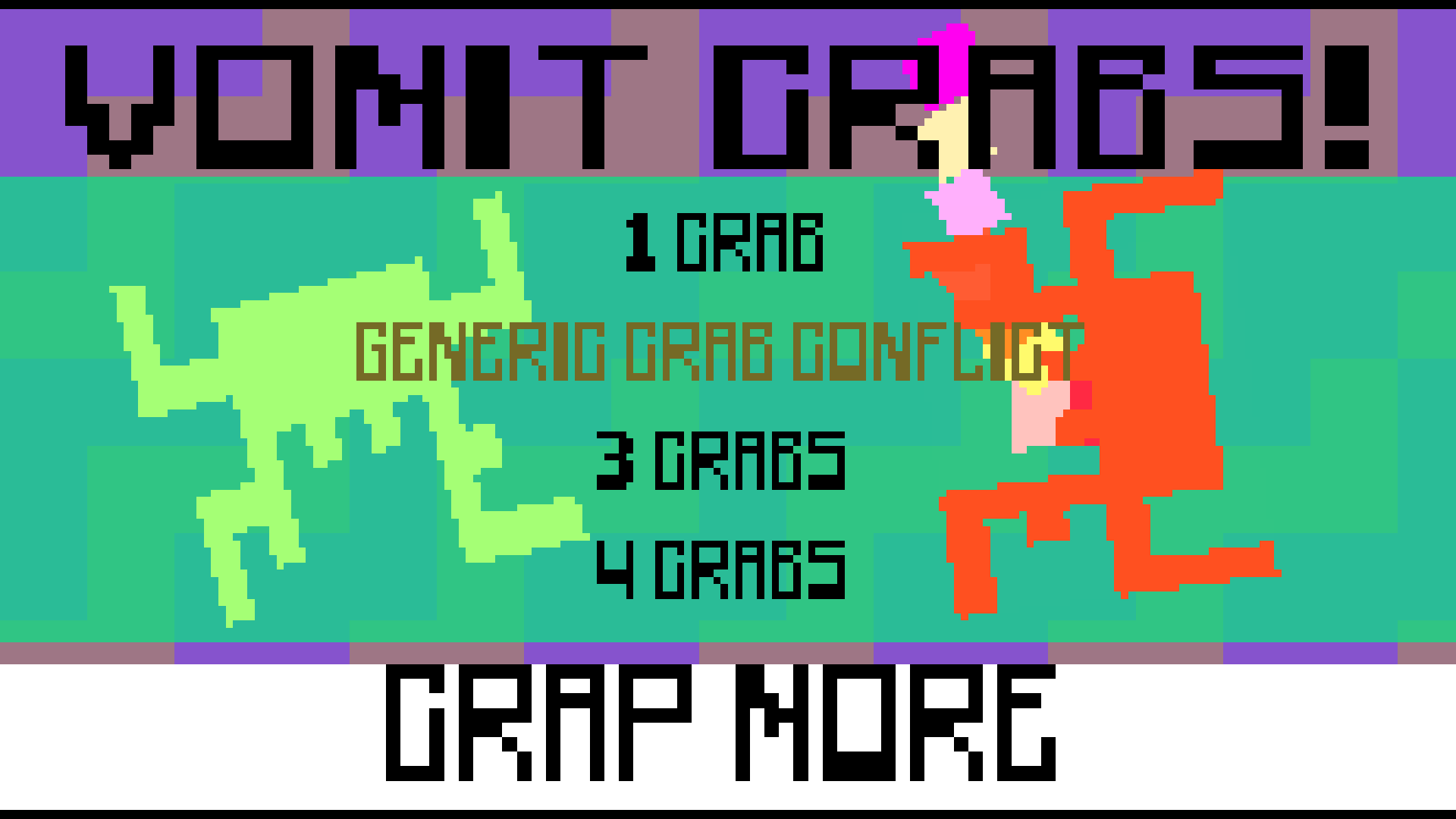 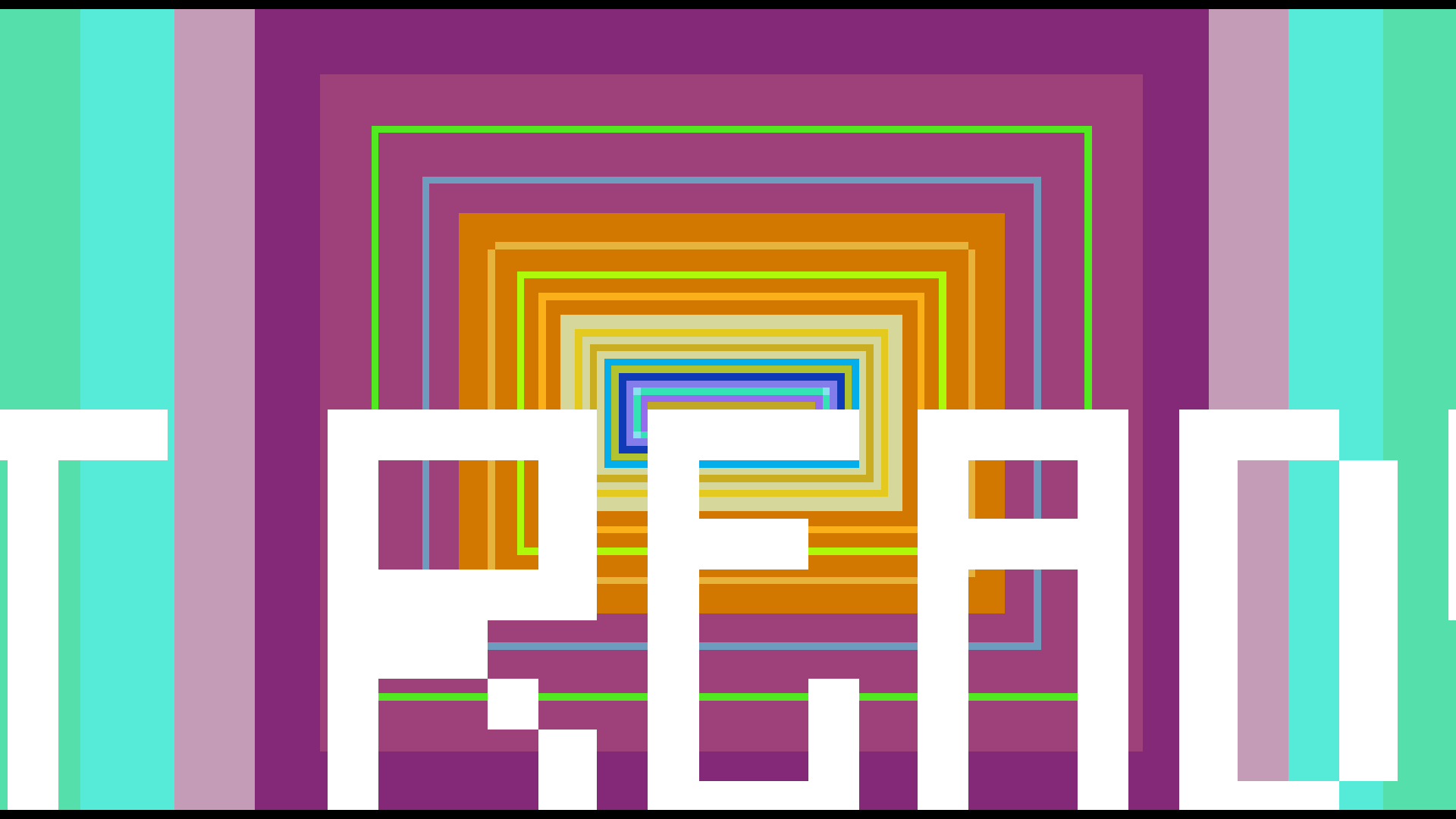 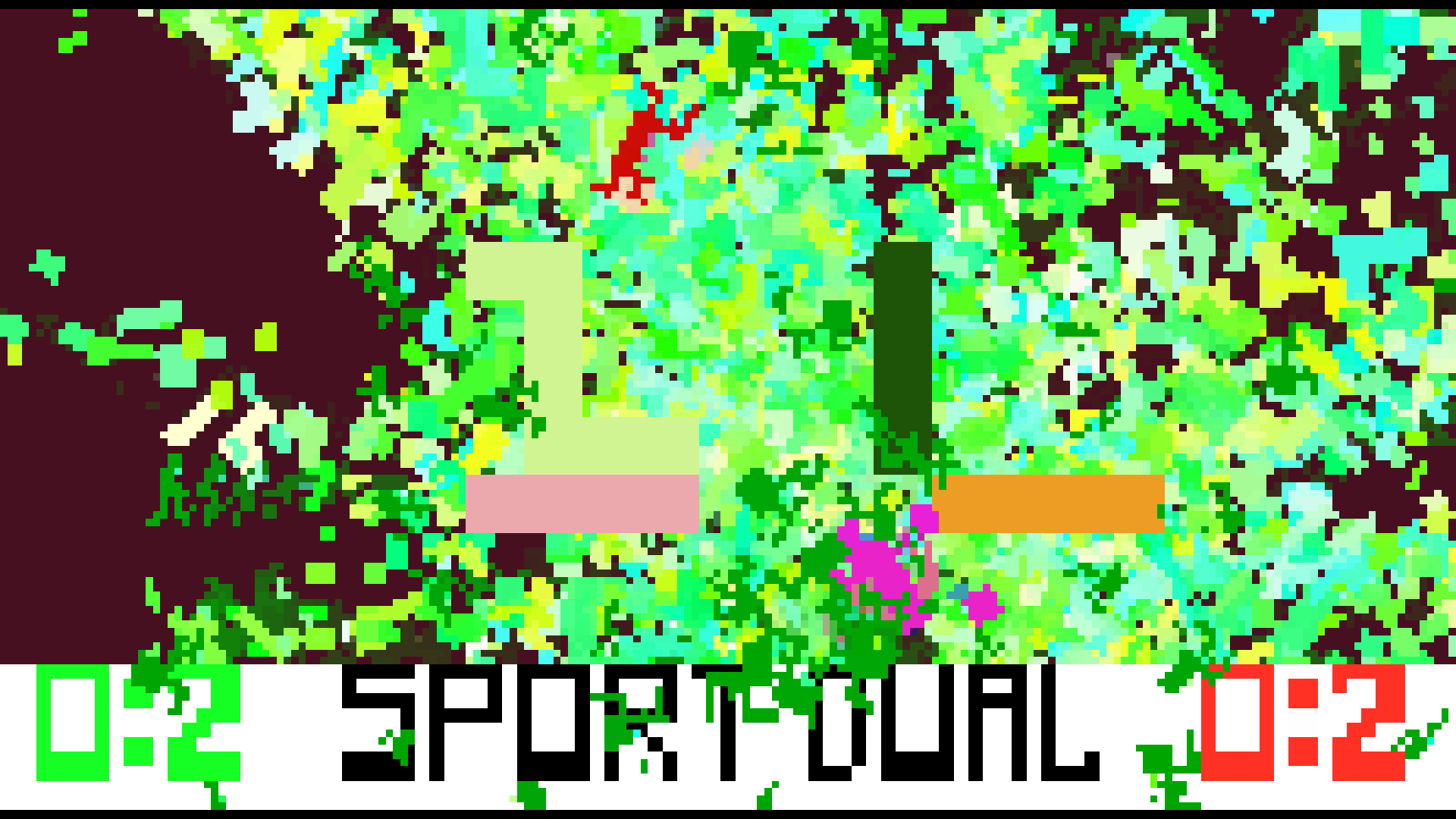 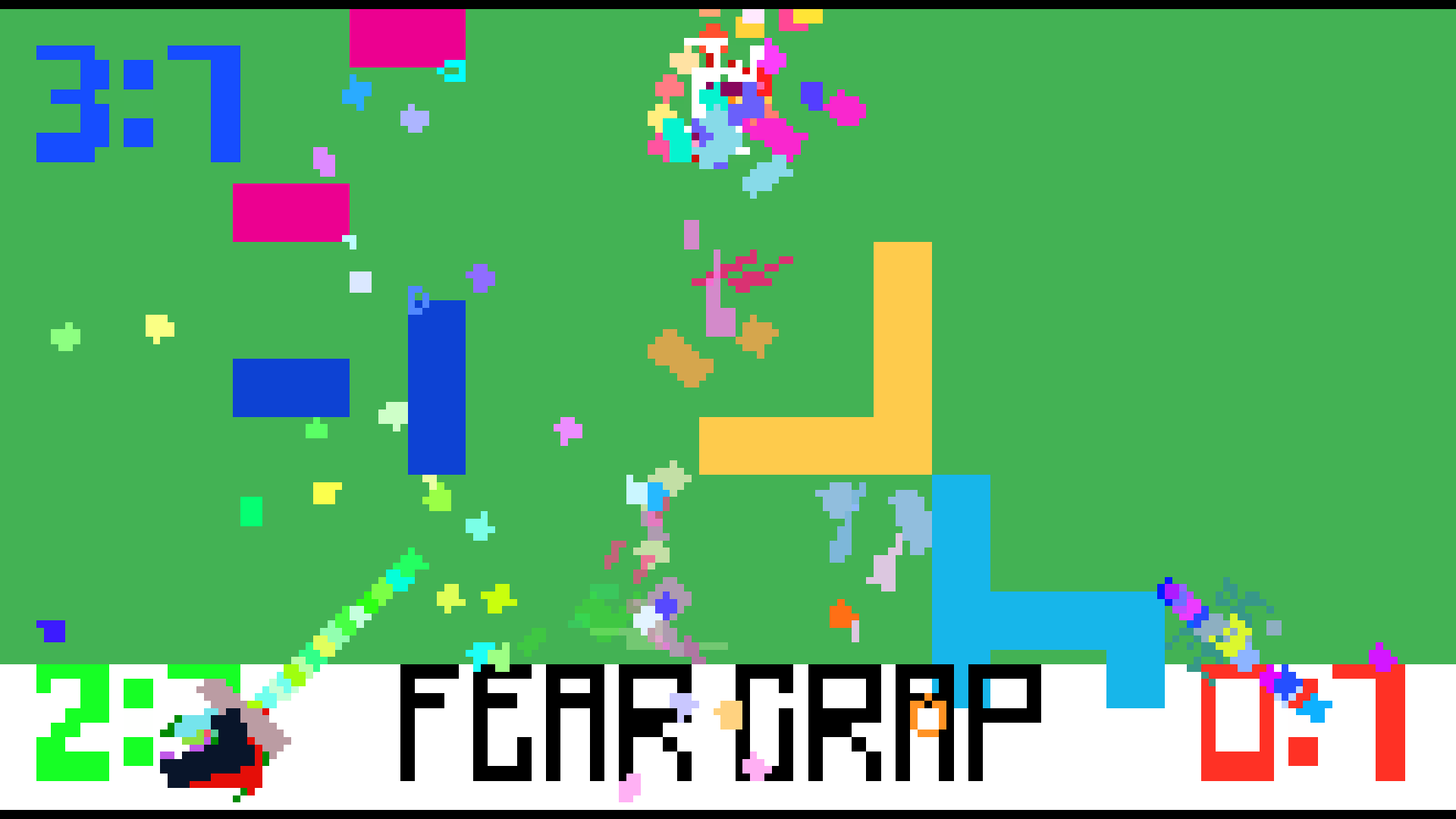 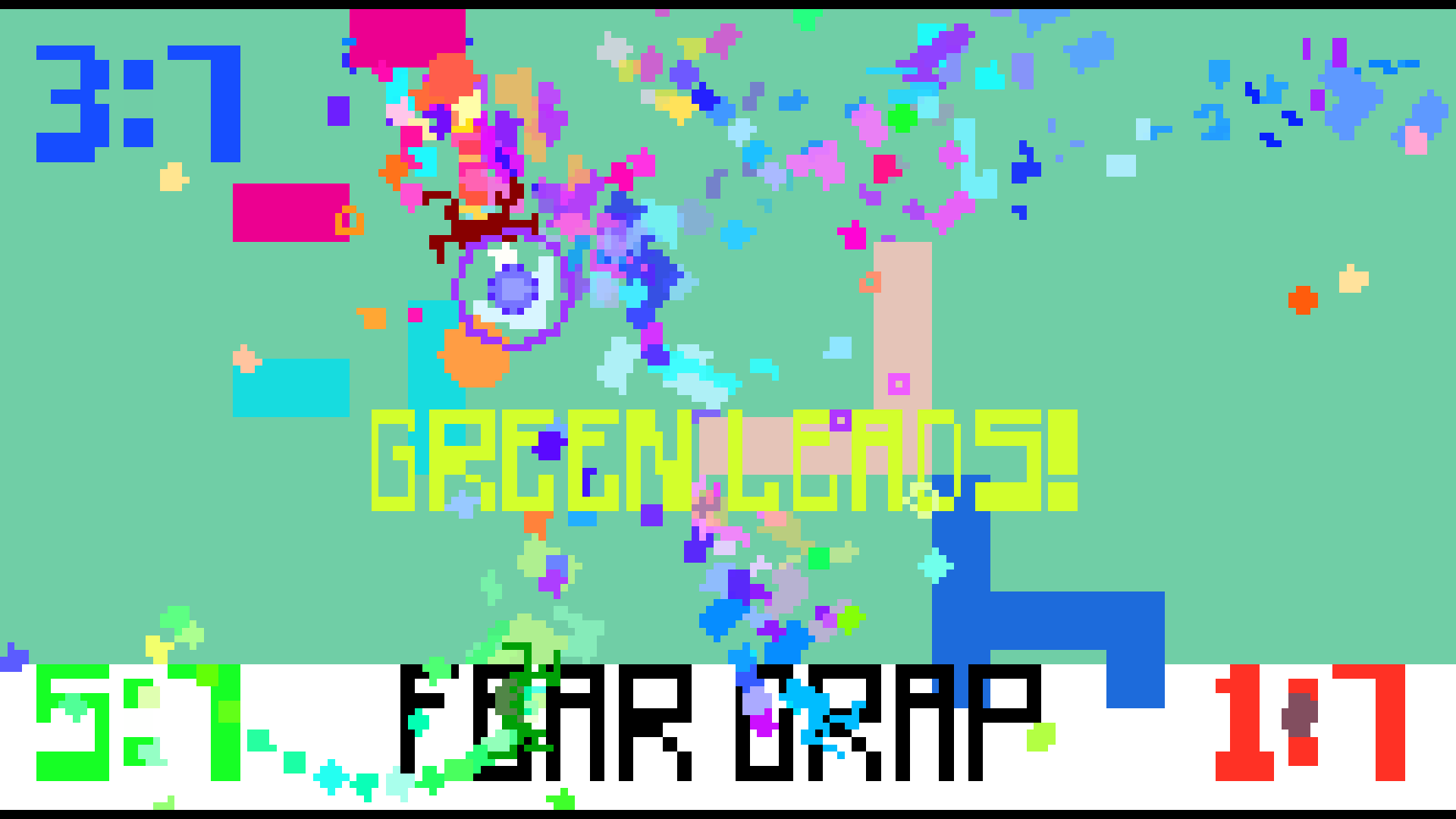 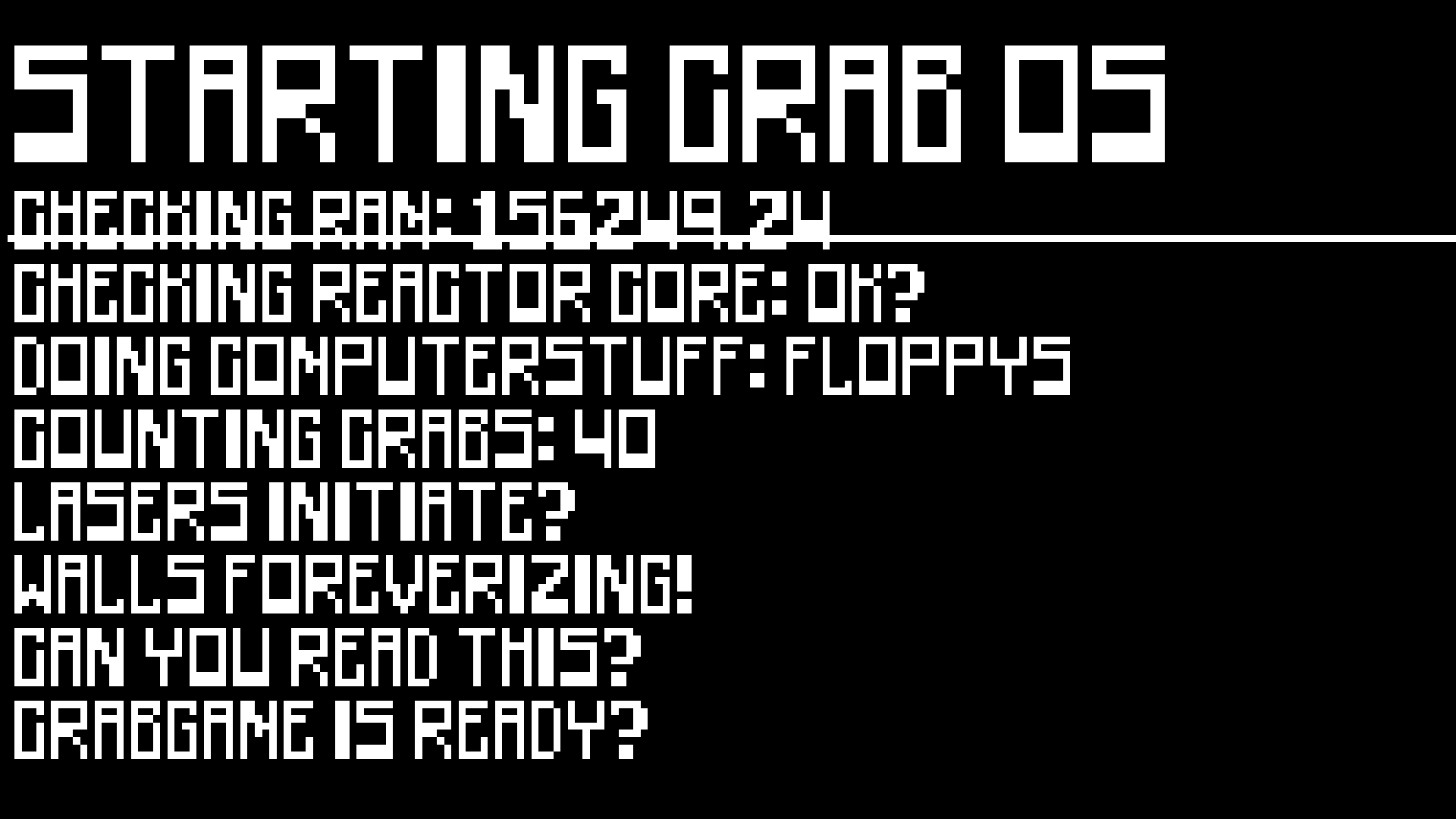 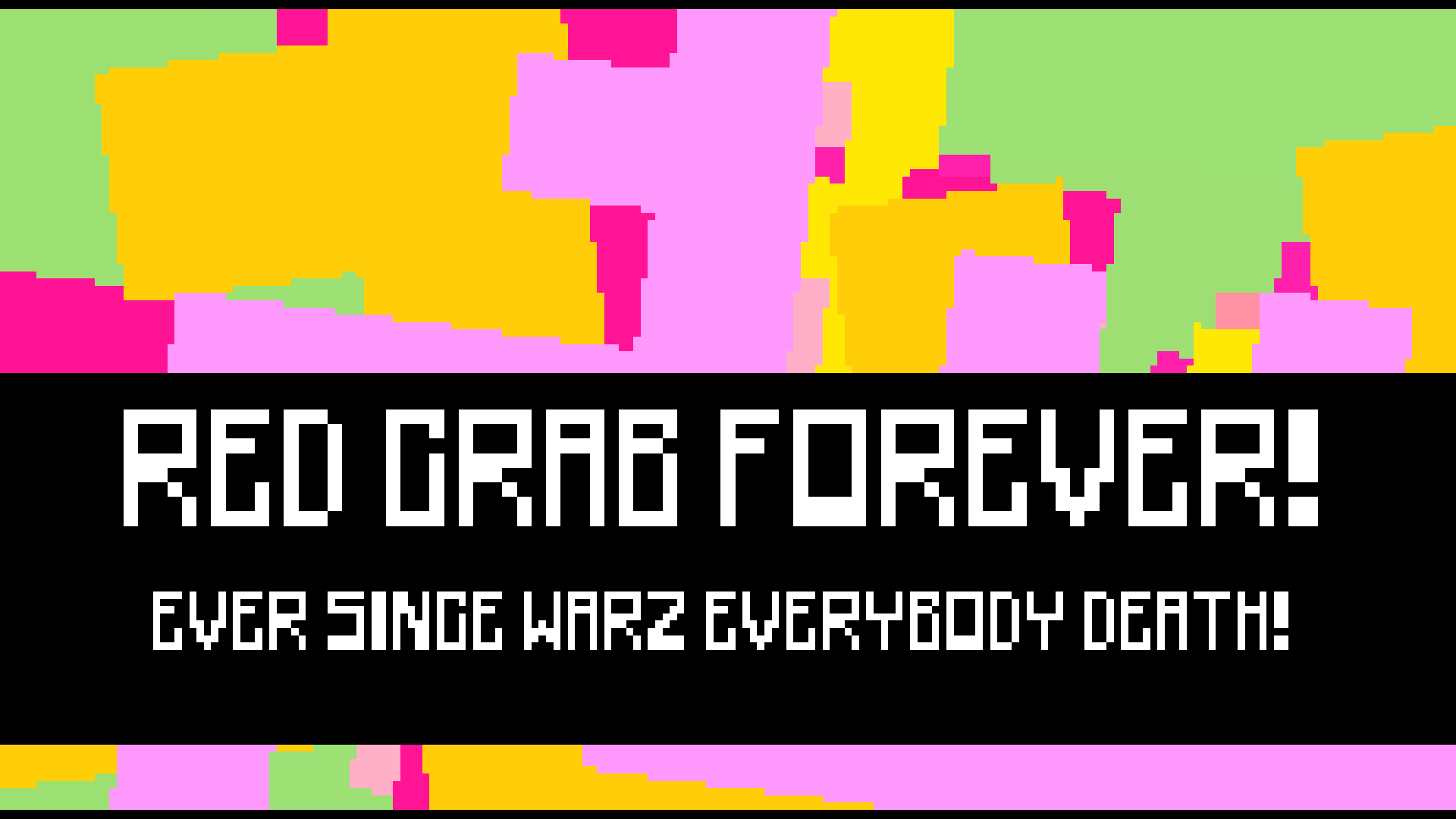 CRAB LORE
These crustacean creatures live their entire lives in combat and revenge.
Each new generation of crabs avenge their forefathers in deadly vomital underwater deathmatch!
This is the way of life is in the ocean, fight to survive, and fight to fight!
During the eons of fighting, the crabs have evolved special strategic advantages such as teleporting through walls
and rotatating if moving right or left. But only right or left, not up and down.

One thing that might not be visible to the naked eye is that the crabs does not live in a "top down" world
on the ocean floor but rather in a side-scrolling universe on a single horisontal slice, or plane, of the sea if you like.
When the crabs grew consious of this they were able to evolve the technique of teleporting simply by shifting planes for a brief moment
and then re-appear somewhere on the horisontal fighting-plane. They seem to only be able to do this in close proximity to walls, perhaps
they climb down or up on the wall through the sub-oceanic dimensions. No one knows! 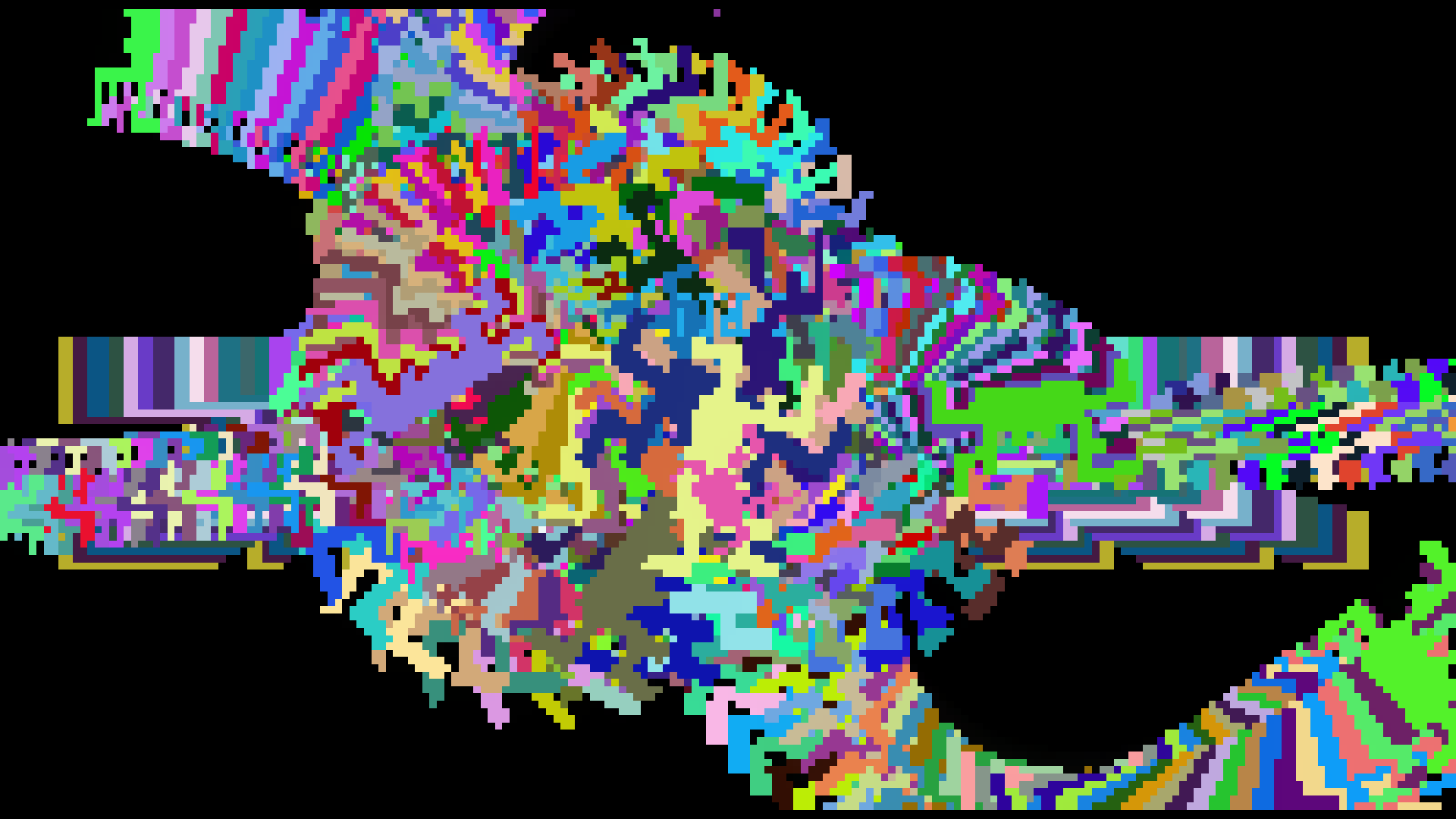 EVENTS
POZNAN 24-26 October 2014
The game was exhibited at Poznan Game Arena in Poland and showcased to 40.000 polish people in three days.
I had a split booth with Olle from Redgrim who was exibiting the cryptic breakout hacker game Cyber Smith!
It was really fun to have loads of people play my game! Some liked it a lot, others were confused!
This was pretty much what I was hoping for! And it was a good chance to see and fix all the small
things about the game that no one will ever notice when they are fixed! =)
Some people came back to play the game over and over again and even claimed to have beaten the
Unbeatable Training Crab but I dont belive them! I'm glad they liked the game though!

I really like the pictures of people playing the game, they look like if they are in an old C64 Commercial! 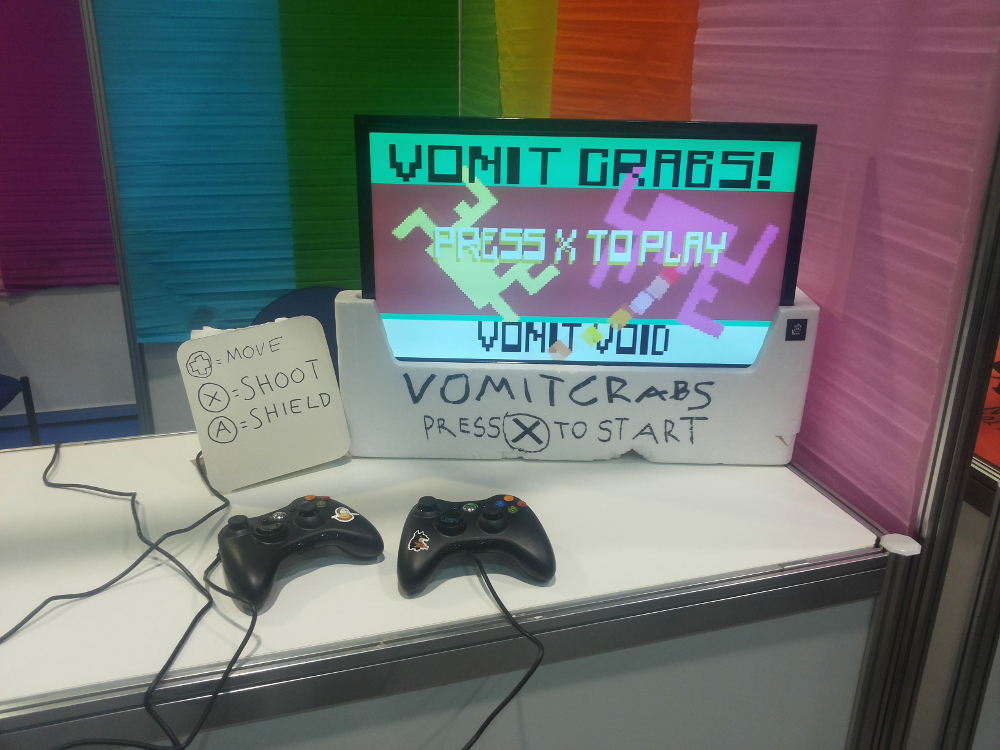 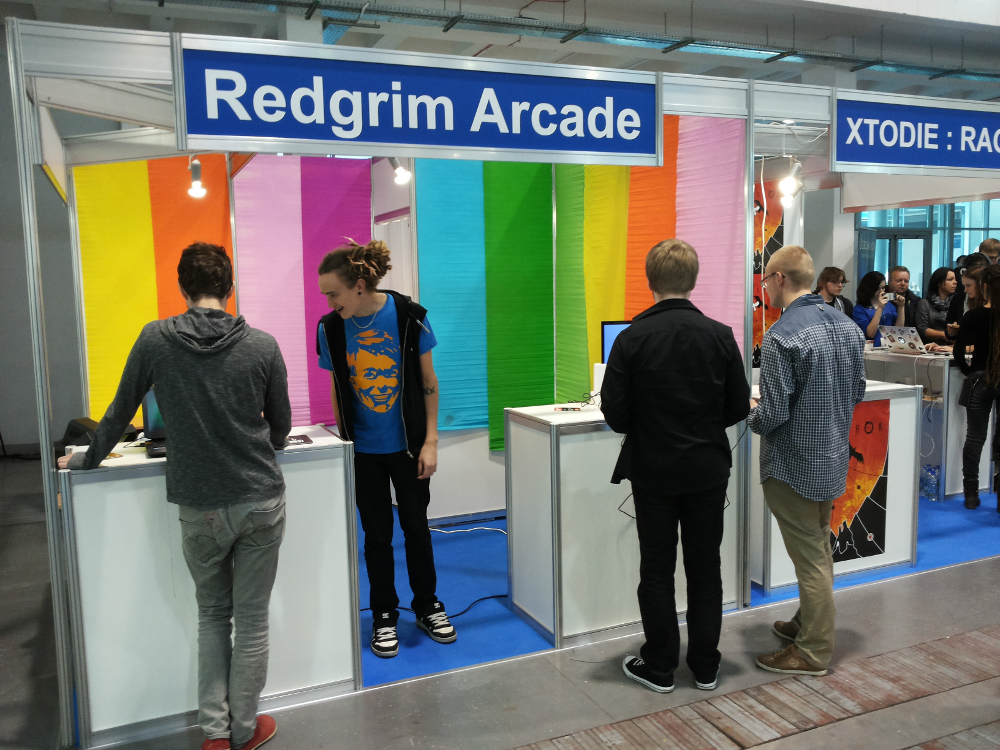 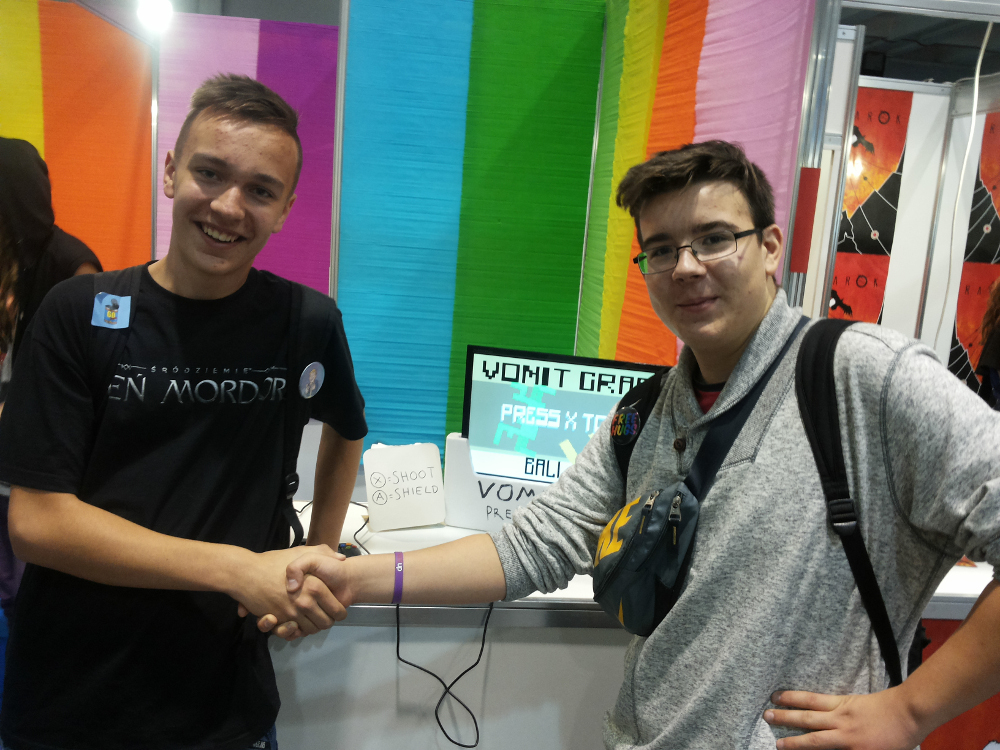 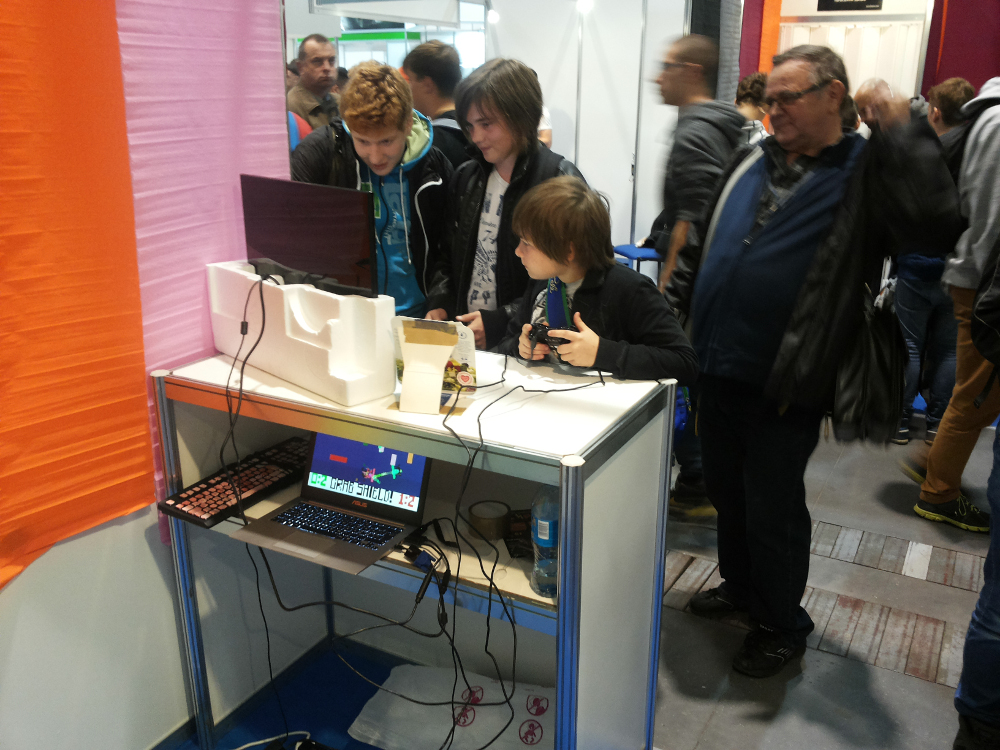 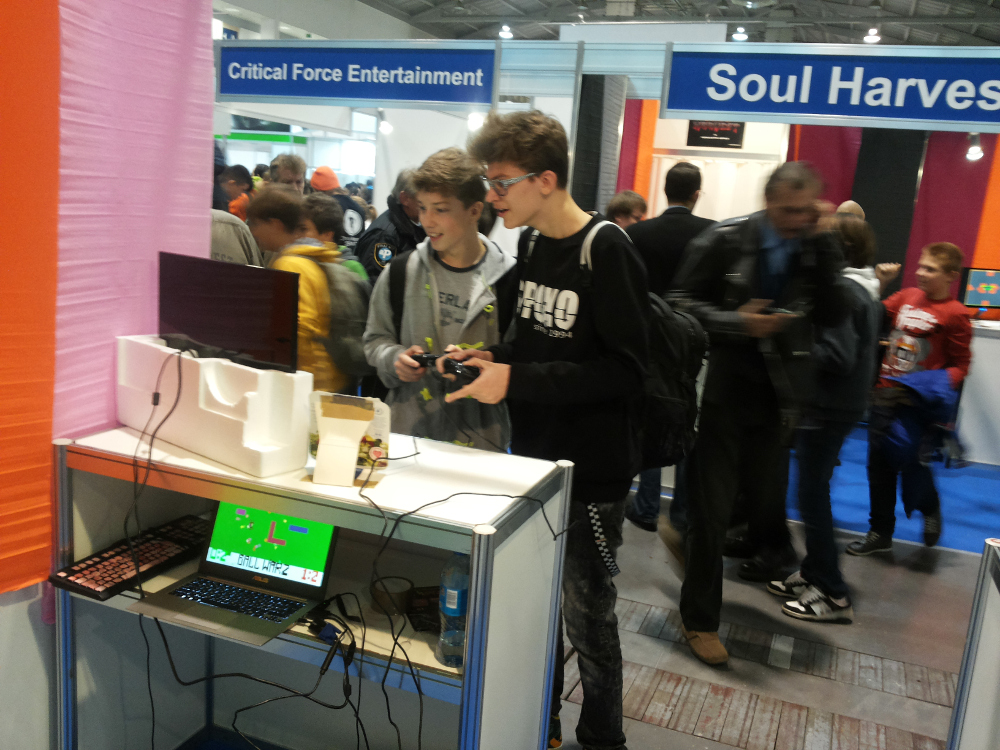 
RETROSPELSFESTIVALEN 11 October 2014
A Retro Gathering in Malmö, Sweden, for people interested in buying and selling retro games like NES, SNES, Mastersystem, Neo Geo, C64.
That kinda stuff that everyone likes! Naturally Vomit Crabs had to be exhibited here! So we hooked it up through our
Crime City Arcade (CCA) system so that people could battle each other in glorious 4 Player Crabmageddon Mayhem on a neo-retro arcade machine! 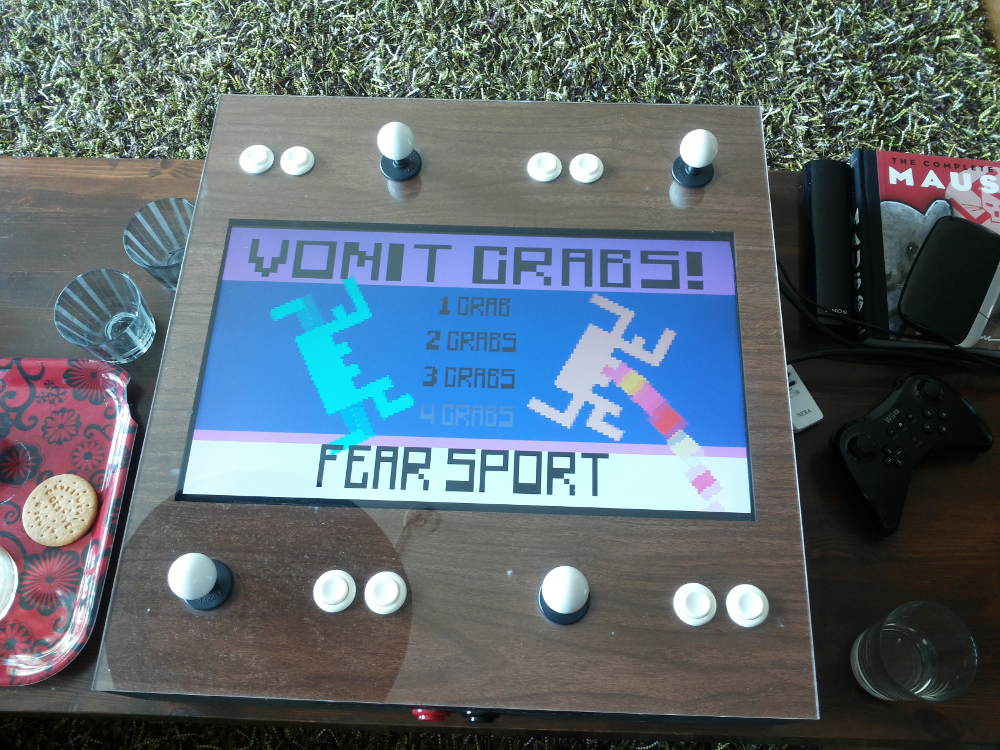 AUTOMATARKAD 23 August 2014
It was also exibited at Automatarkad, a party for local multiplayer games in Gothenburg held by Wang Electronics. Great fun!
Lots of games and people! Great music too!
Everyone should go to these Wang parties!


WORLD CHAMPIONSHIT July 19th 2014
There was a "World ChampionShit" this summer at the game jam No More Sweden in Gothenburg with over 30 participants from all over
the world. This was to determine who really is the Vomit Crabs Champion of the known universe.
A lot of hope had gone in to true onlinegamer Simon Gustafsson as a winner but as the competition hardened he was beaten by old school
gamer Rockard Sandgren, who later won the whole tournament against game developer Grapefrukt and got to take the pretty 3d-printed statuette depicting a black Crab home.
The black crab is also known as the unbeatable training crab. A strong symbol among hardcore Vomit Crab players! 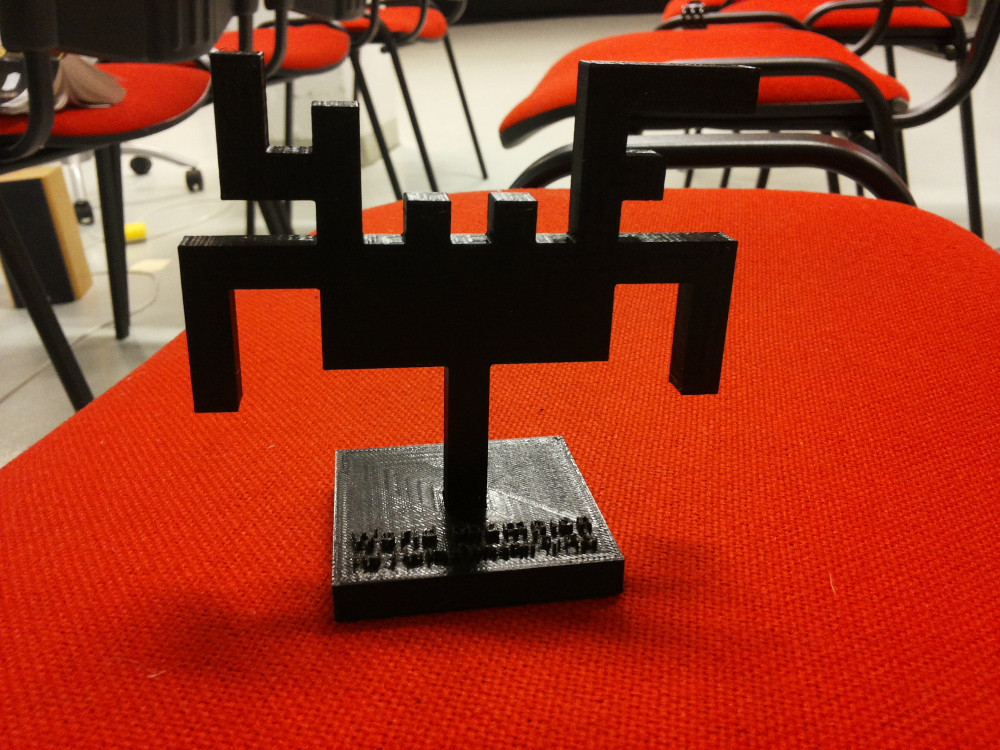 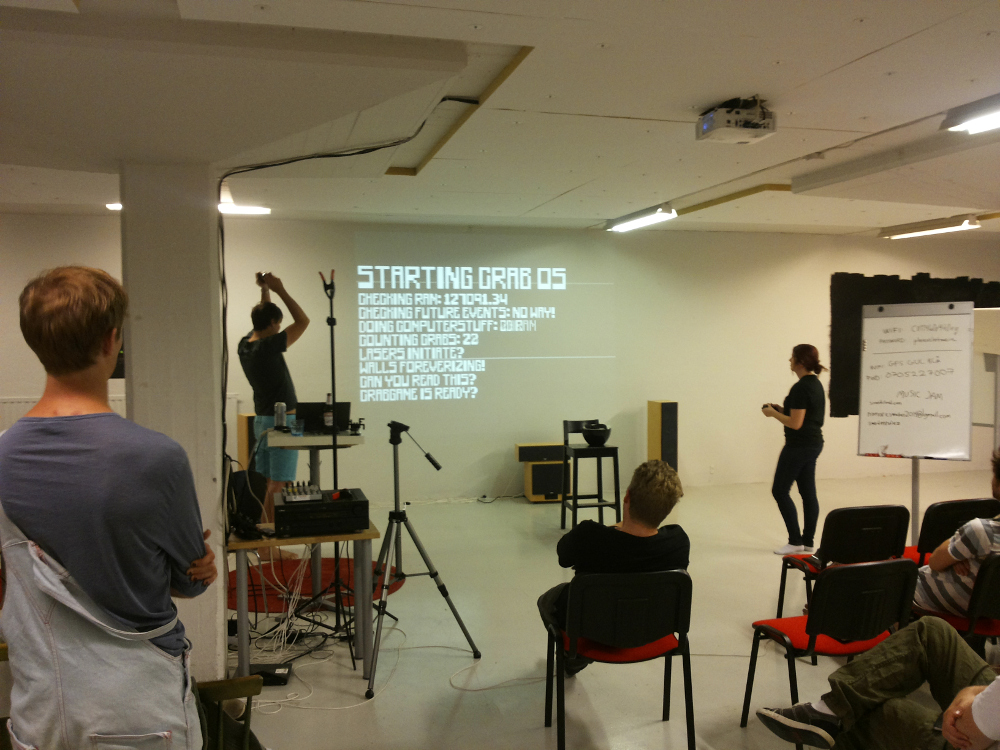 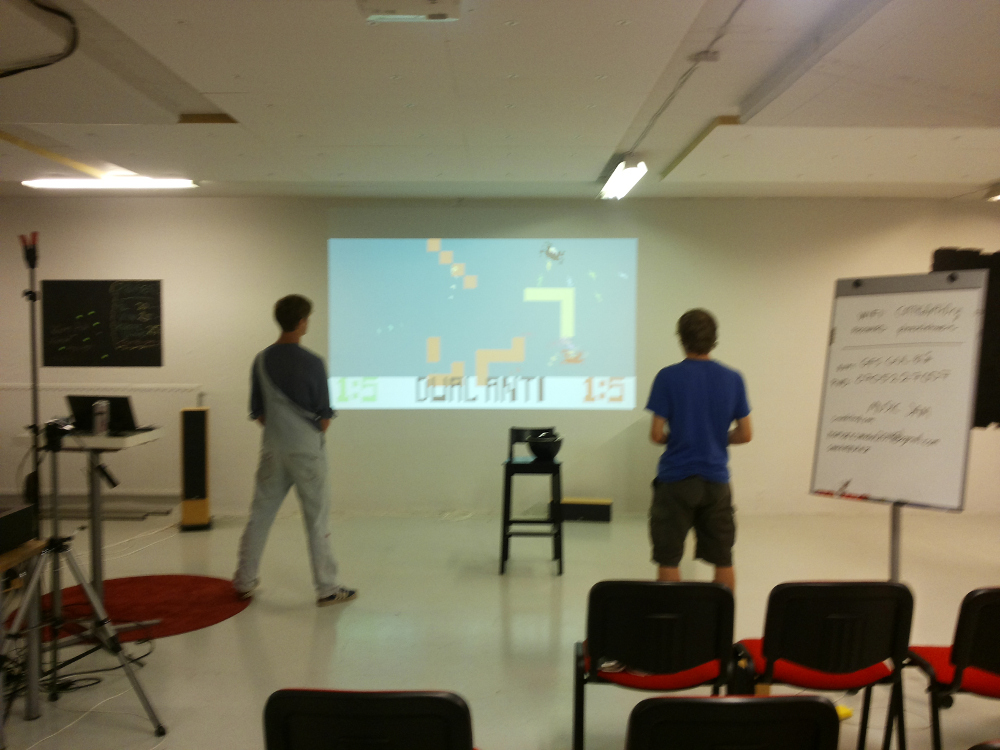 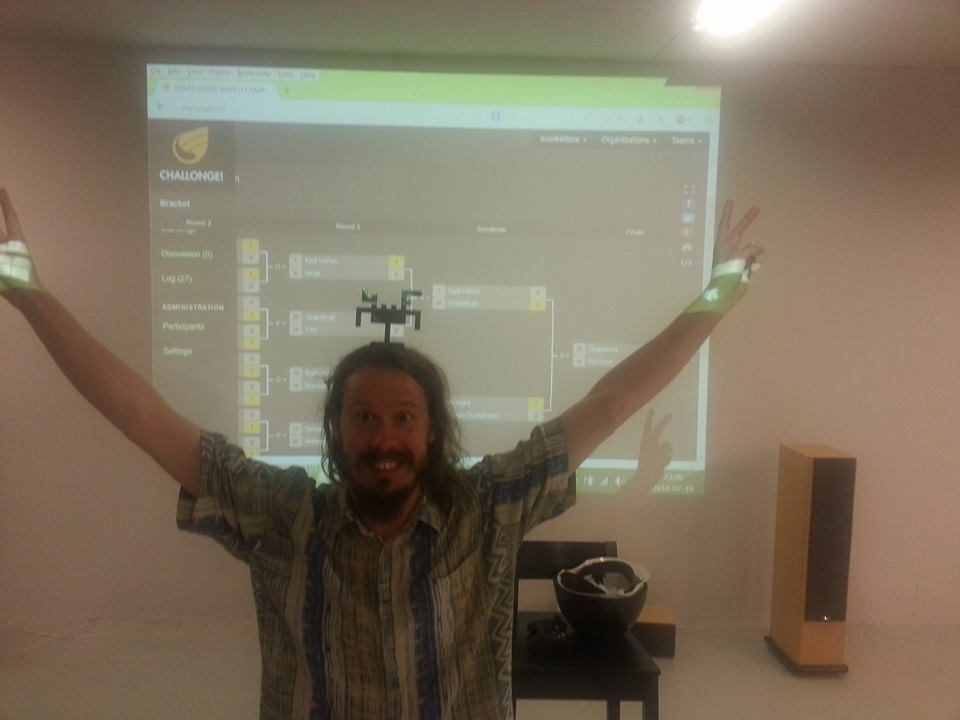 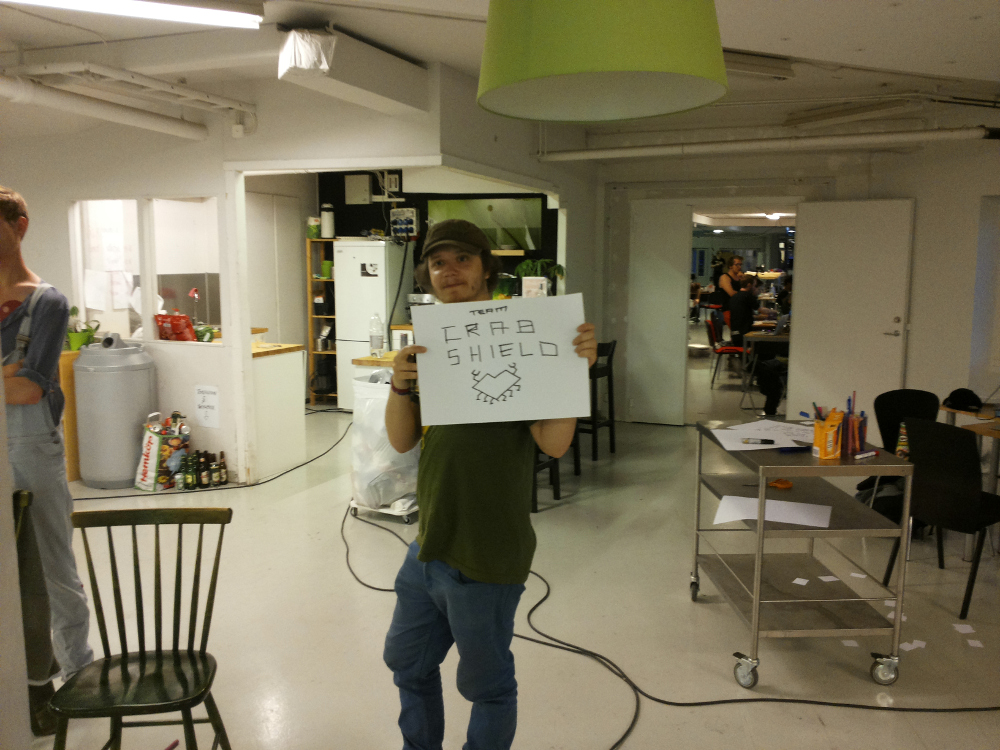 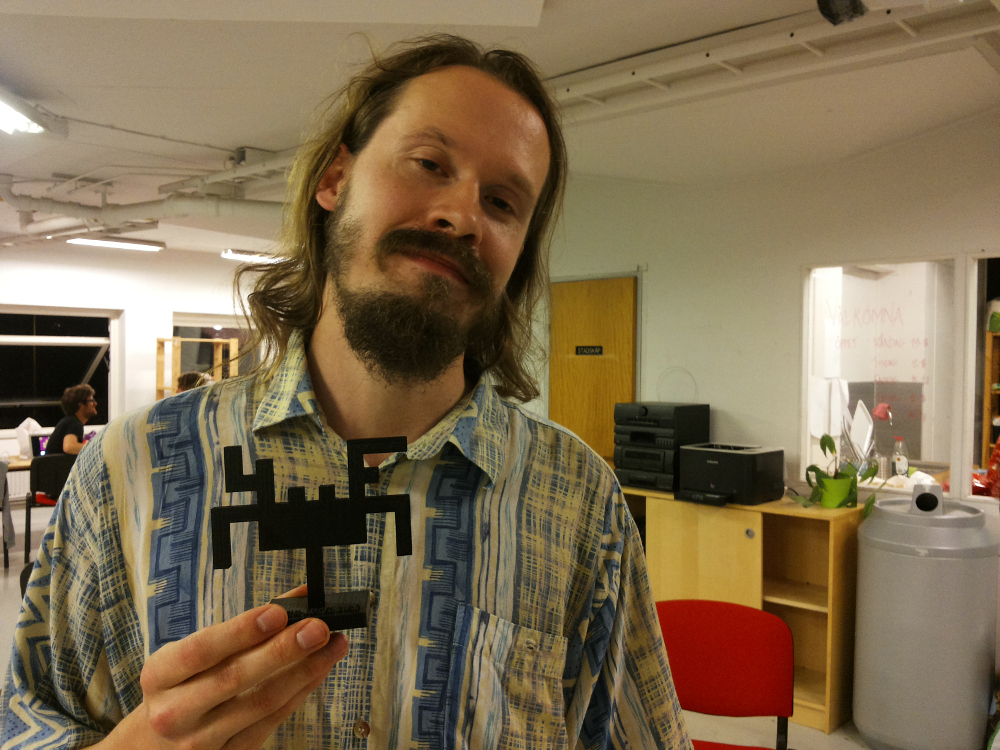 (Q)Hello Rockard! Tell us a little bit about yourself!
(A)I love to wander around in nature, meditating about life. There are so many patterns and colors and I find it amazing the mind can filter all of it out without overloading. It's an amazing filtering machine!
Oh and I love to learn stuff, and do stuff. I love making music. Computer programming. Painting. Finding insights about myself and the universe in general. Also I'm male and 33 years old.

(Q)How long have you been playing Vomit Crabs?
(A)Hmmmm... probably as long as the game has existed, so since beginning of last summer. But total time, not so much. I have never practiced or anything.

(Q)How come you are the best Vomit Crabs Player in the whole world?
(A)I know the developer ;). But seriously, I think you need to find a way to play the game that suits you. Your mind need to accept the changes that constantly occur. Like real life, you are dead if you are in denial of a troublesome situation. New things, both good or bad, brings new opportunities in your adventure in life. I think its important to embrace it. You should not be a dead fish in the river, just act like one! I also do meditation, which trains your senses and helps your focus.

(Q)How did you feel after winning the World ChampionShit?
(A)Weird. I have never won first place ever... I think. I felt the swedish Jantelagen! Like... oh I'm not good enough to win this. Im not worthy. I felt like an ass destroying the other crabs! But.. it was fun. =)

(Q)Another famous Vomit Crabs Professional is Simon Gustafsson, he was highly ranked before the ChampionShit but you
beat him in the semi finals.
What is you relation to Simon Gustafsson? Have you played against him before?
(A)We were in the same class a long time ago when we were studying game design. When we first worked together during a school assignment I couldn't handle his attitude. But now I think he is a nice, fun and impulsive guy.
Yes, I have played against him before. I never won... anything! I totally lost BIG all the time.
He was always talking about his special focus. All the blinking bullets all in his mind working out the perfect dodging technique.
He truly was the master.

(Q)What is your favorite strategy/technique?
(A)Aiming the bullets and watching them bounce... and kamikaze - good for when the other player is too much in control!

(Q)How will you defent your title when the game goes public?
(A)By doing nothing! I have never trained and never will. I trust my subconscious. I feel completely ready at this very moment. 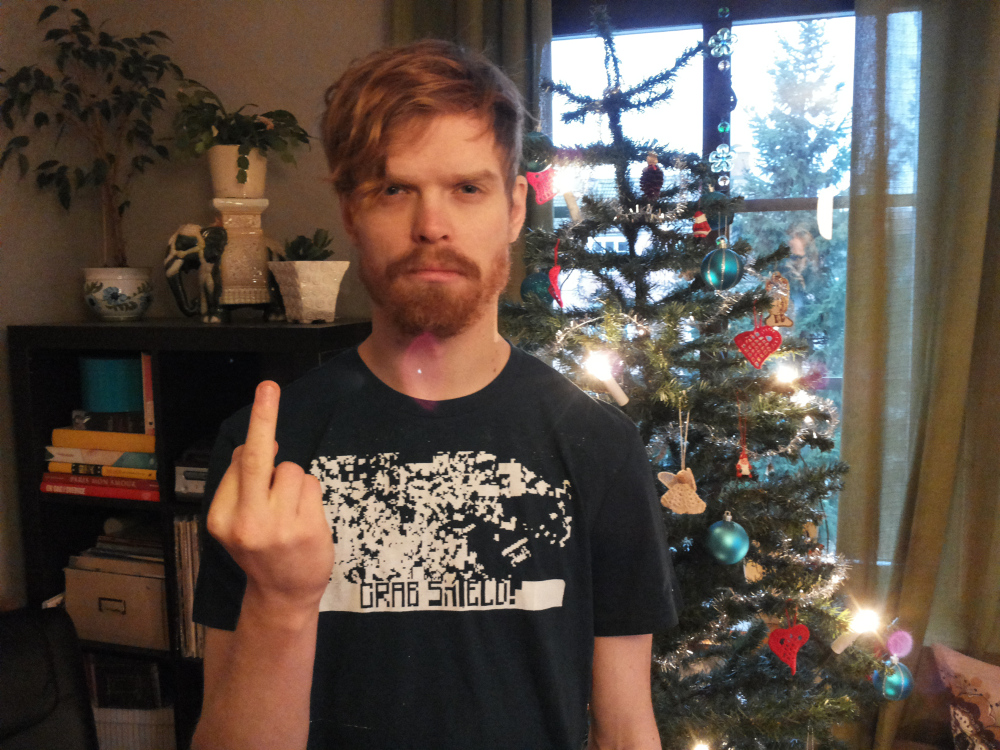 (Q)Hello Simon! Tell us a little bit about yourself. Who are you?
(A)I'm Simon Gustafsson. Also known as Sklett or @sklettet for short. I'm a independent game developer, illustrator, graphic designer, martial arts enthusiast and professional Vomit Crabs player.

(Q)For how long have you been playing computer games?
(A)For as far as I can remember. But the first system I owned was a Gameboy, and my first game (after Tetris) was Double Dragon. My first contact with the PC was around the same age where my grown-up neighbour had a 386 for work. I started hanging out there more and more, making crude animations using the scrollbar in paint and playing games.

(Q)Wich are your favorite local multiplayer games? (all time)
(A)Heroes of Might and magic III, Cyberdogs (and C-dogs), River City Ransom. Vomit Crabs and also LAZA KNITEZ!! can outshine those at any time, but that requires the right competition.

(QHow many hours per day do you practice?
(A)I don't practice much, I need to warm up for two games. Then I'm ready to rock. Vomit Crabs is only as hard as your opponent.

(Q)What is your favorite strategy in VC?
(A)I'm an expert mind gamer, so I try to make people give up and/or tense up before they start playing. But usually I use my in-game movement to crowd the opponent. Make them think about what I'm doing next instead of the other way around. Keep them on the defensive. I also calculate my teleports a lot and spray vomit to create space. But I think my most most favourite one is to crab shield until the background has the same color as my bullets.

(Q)As a graphical designer, what do you think about the grapics in VC?
(A)They are punk as fuck. It's a style I could never master, because I would only feel obliged to un-punk it on every turn. The pixel collision totally make the game. This game could not have been made in any other way, because the graphics and colors are also part of the game design.

(Q)Alot of people thought that you were gonna win the big ChampionShit at NMS. (A)How did it feel to end up in third place? It felt like shit. I was so fucking mind blown. I lost to Rockard whom I completely destroyed like ten games in a row the days before the tournament. He really stepped up and I got thrown off guard. He had a realy tight game, no wasted movement and great accuracy.

(Q)Are you going to try to reclaim the title next year?
(A)Yes, and in an impressive fashion. People will know last time was a fluke.


T-SHIRTS
Somewhere along this crazy ride i decided to learn how to screen print so that i could make these super nice CRABSHIELD T-shirts!
I might just make some more of them! 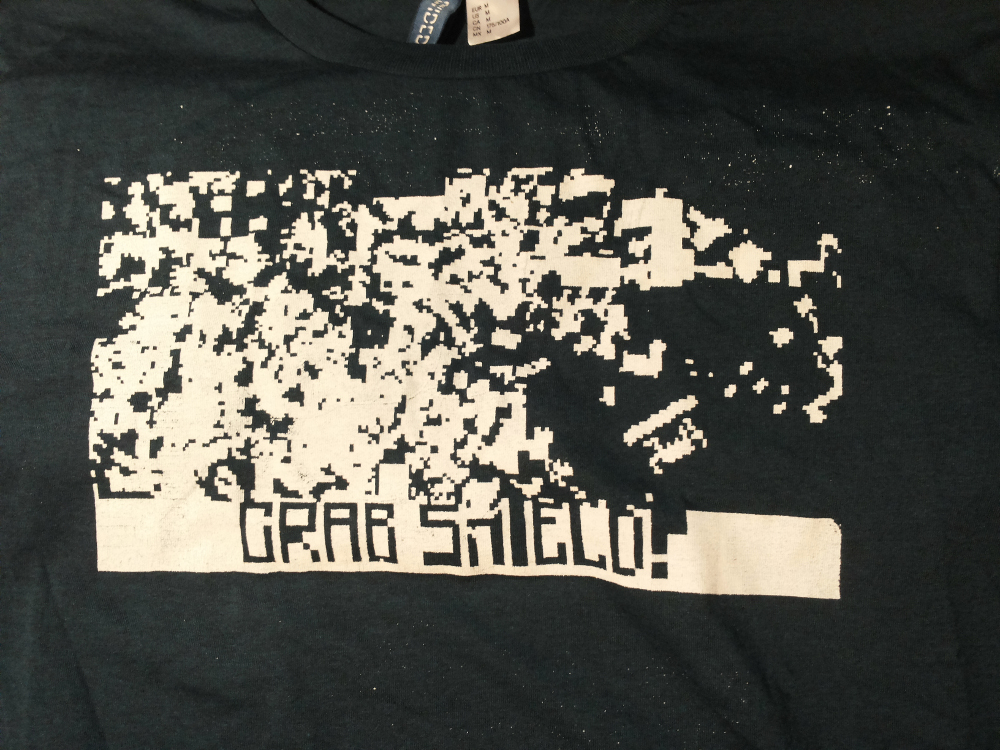 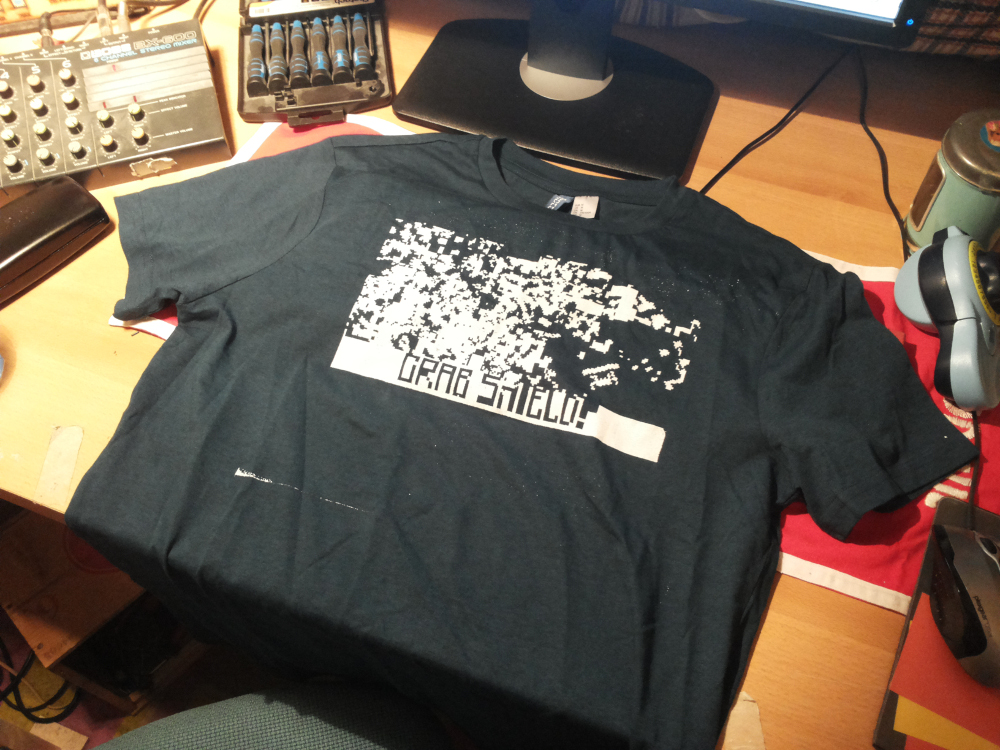 THATS IT FOR NOW!
Go and play the game with someone!